On the cusp of its 40th anniversary, the Olympic Park embarked on a major shift in both its vision and its public role. As one of Montreal’s must-see venues, it remains a choice destination for Montrealers, Quebecers and tourists alike. The guiding principles of the brand revitalization centred on restoring the Park’s popularity to the levels seen right after the 1976 Games, honouring the past, yet celebrating its place in the current city, while always taking inspiration from the world of sport. This amazing work was been developed by lg2.

lg2 is the story of two entrepreneurs. Sylvain Labarre (the “L”) and Paul Gauthier (the “G”). The two of them, along with Gilles Chouinard, started to build a small agency with big ambitions. More than 25 years later, with over 250 employees and thousands of awards for some of the most innovative and well-known brands in the world, the founders’ relentless focus on their people and their product remains just as strong. And their bold ways have since been successfully passed on to over 20 new entrepreneurs, who work just as tirelessly to preserve our independence and creatively driven business model.

The new identity takes a dynamic, colourful approach, creating an energetic link to sports and activity

The logo is inspired by both the track and field running lanes, and the circular form of the Olympic Stadium, Montreal’s most recognizable icon. The four circles that make up the logo and the four colours used across the platform represent the Park’s four facilities.

To complement the new brand identity, a poster campaign depicting the Park’s attractions reminded Montrealers of the athletic facilities that they can use every day. The entire series is graphically consistent, colourful and helped to rejuvenate the Park’s tired image. 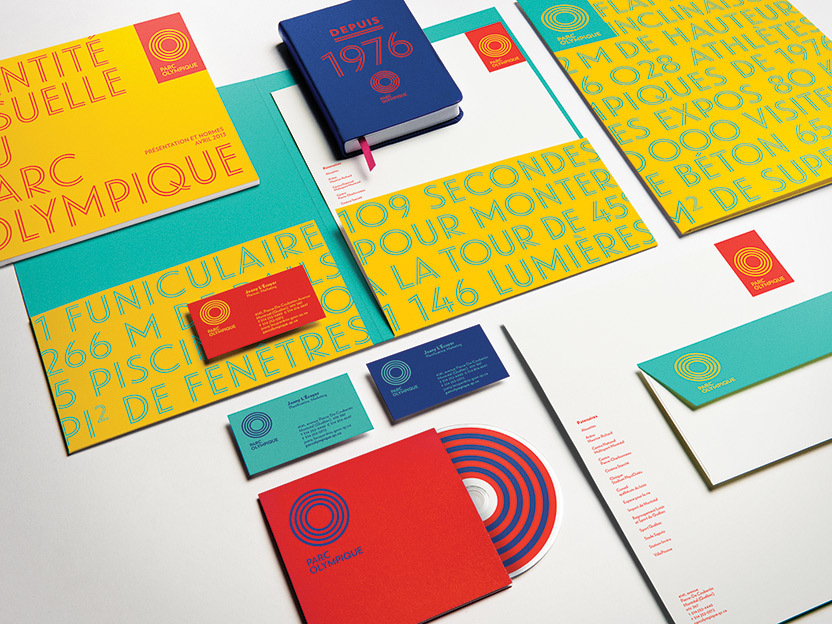 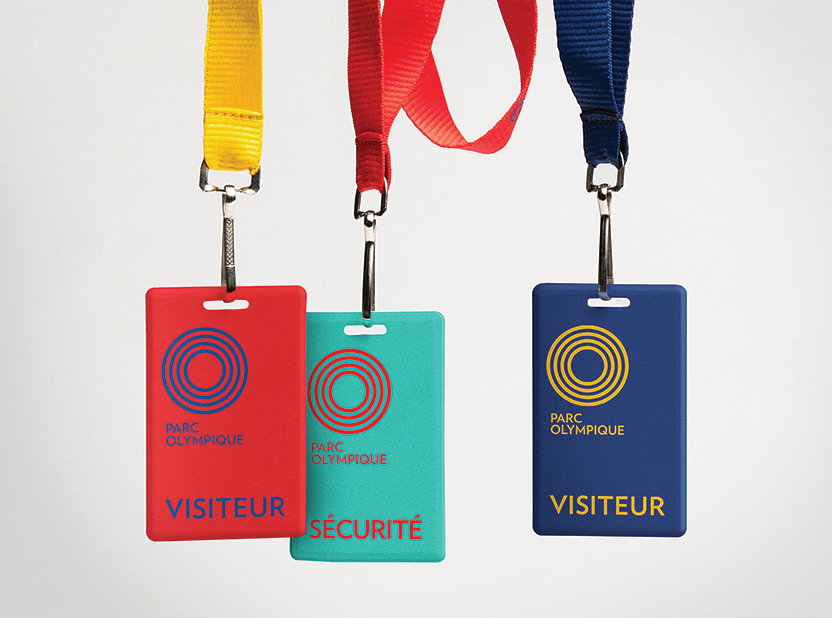 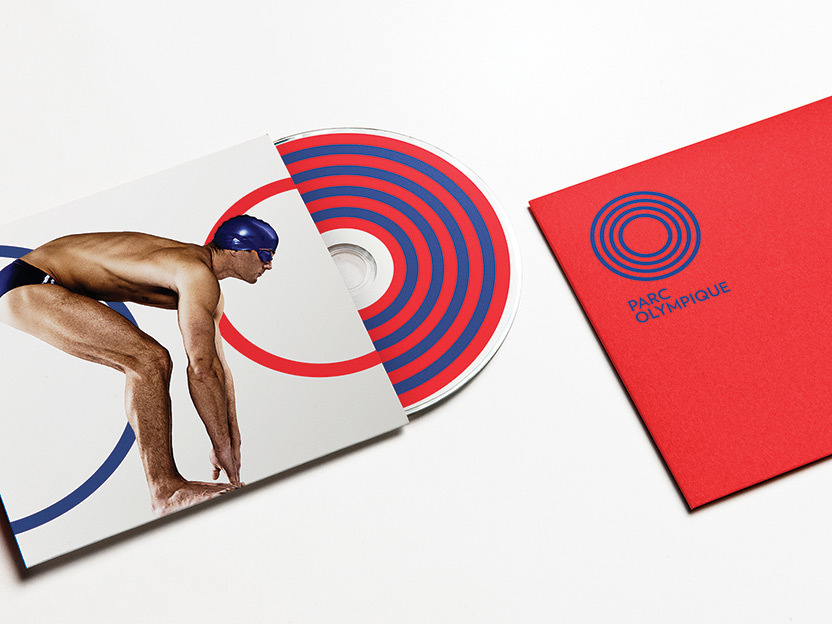 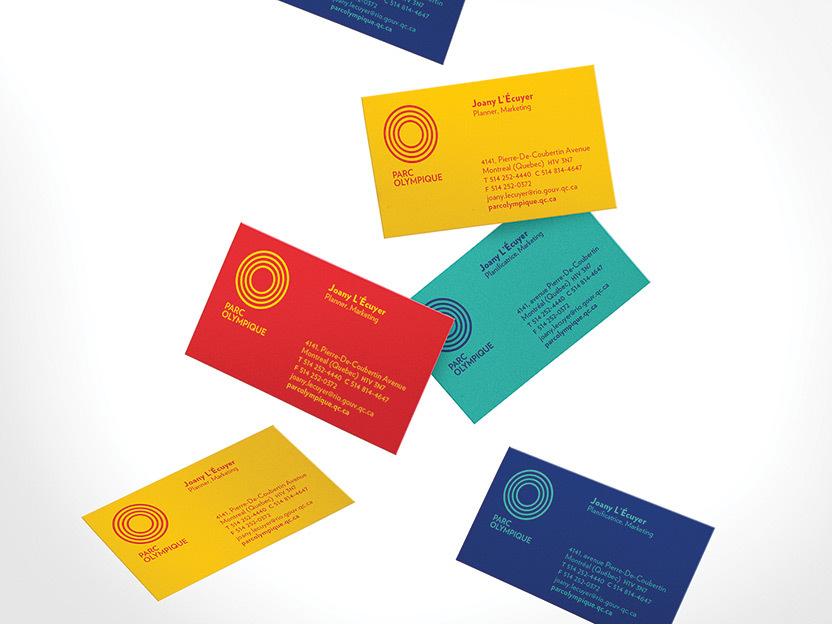 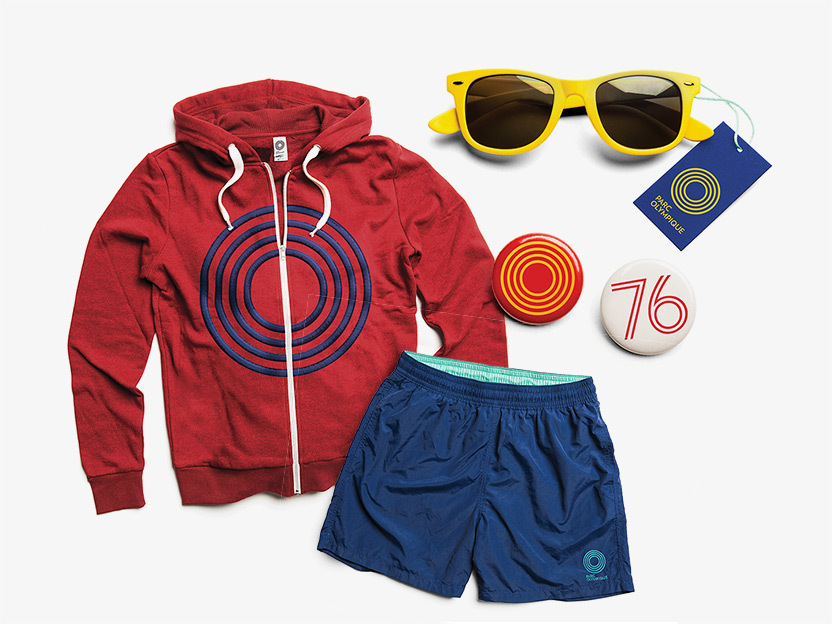 The poster campaign celebrating the Montreal Olympic Park’s 40th anniversary paid homage to its structure by centring on the stadium’s architectural profile while recalling some of its most iconic moments of the last 40 years.

The Olympic Park’s rich history inspired us to highlight a dozen historical, cultural and sporting figures in a playful and effective manner. The integration of the “40” within the logo reflects the refined, structured and universal approach of the Olympic Park’s brand image. 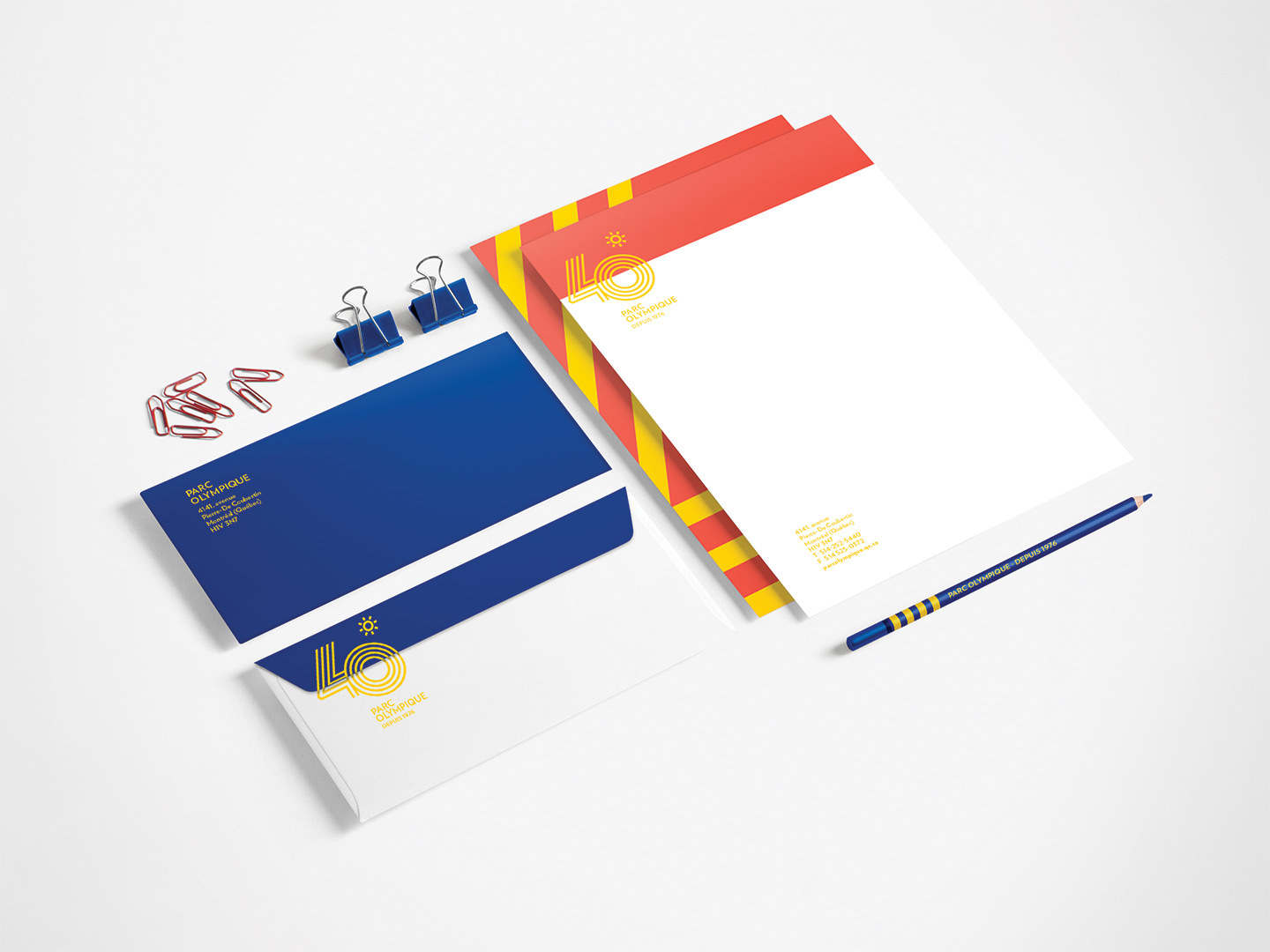 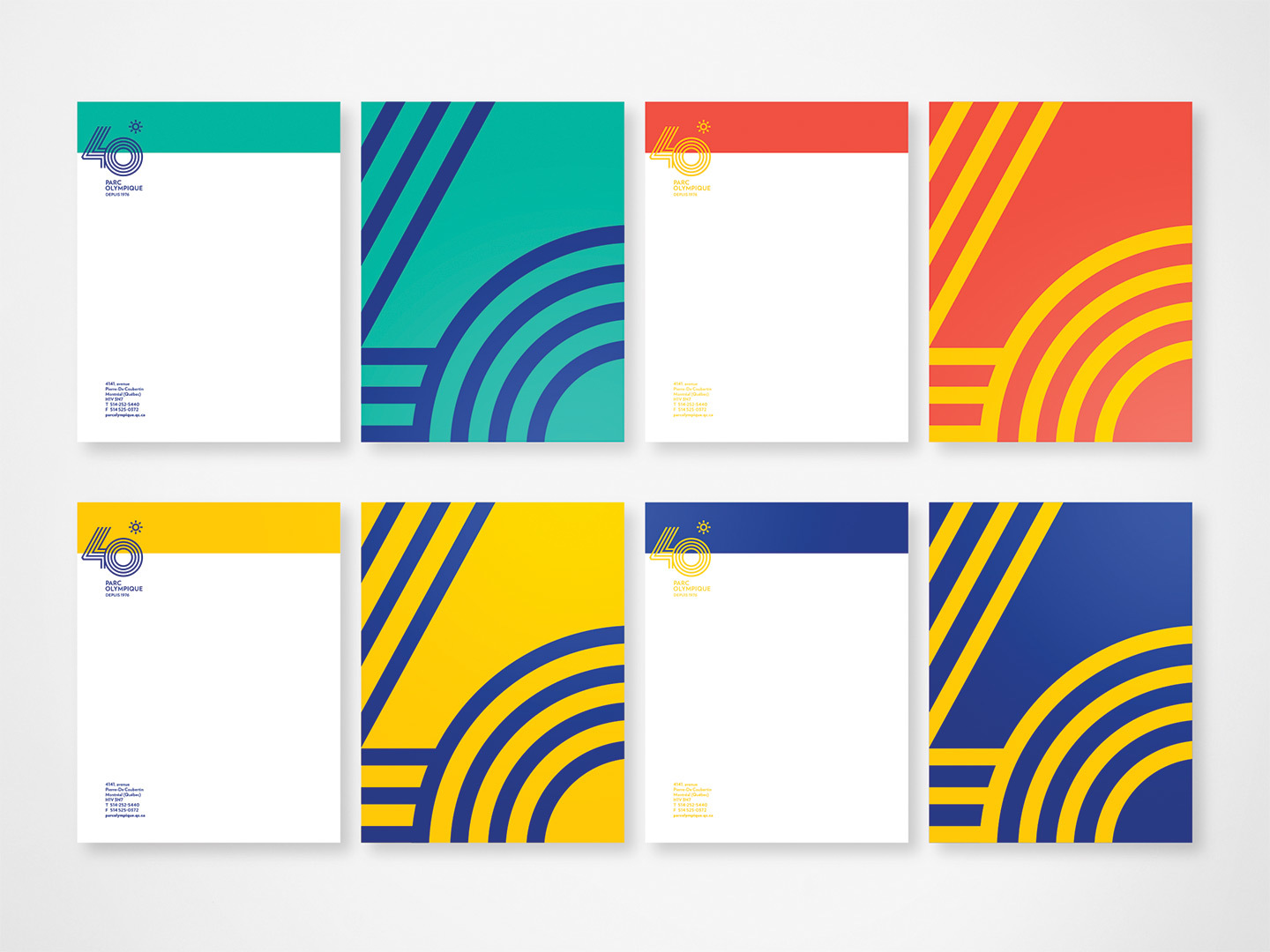 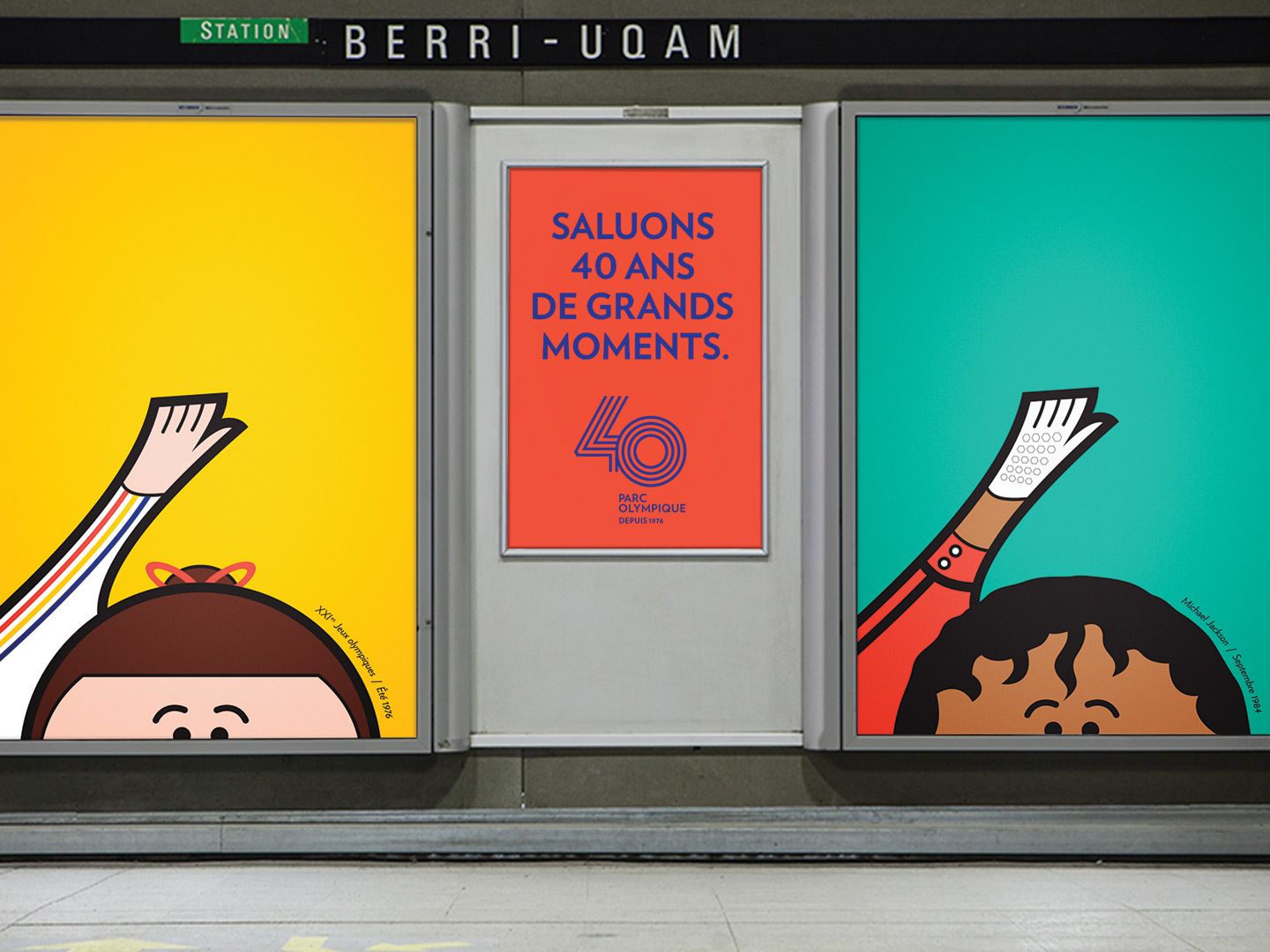 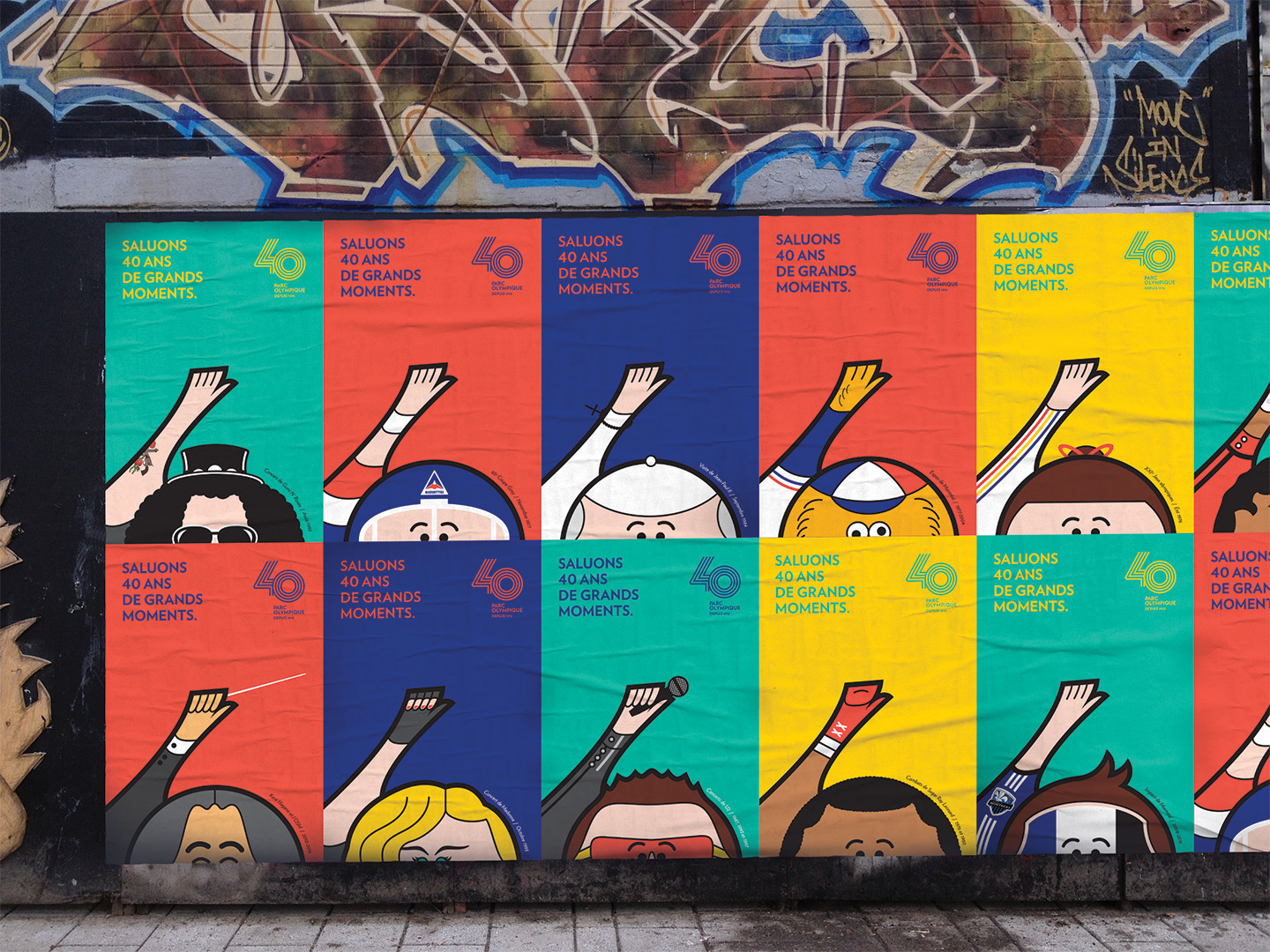 The Since 1976 exhibition brings the Olympic Park brand to life within its own space. Seven thematic stations were developed along a scenic route that encouraged discovery.
The staging, projections and signage all acted as a helpful tour guide throughout the Park. 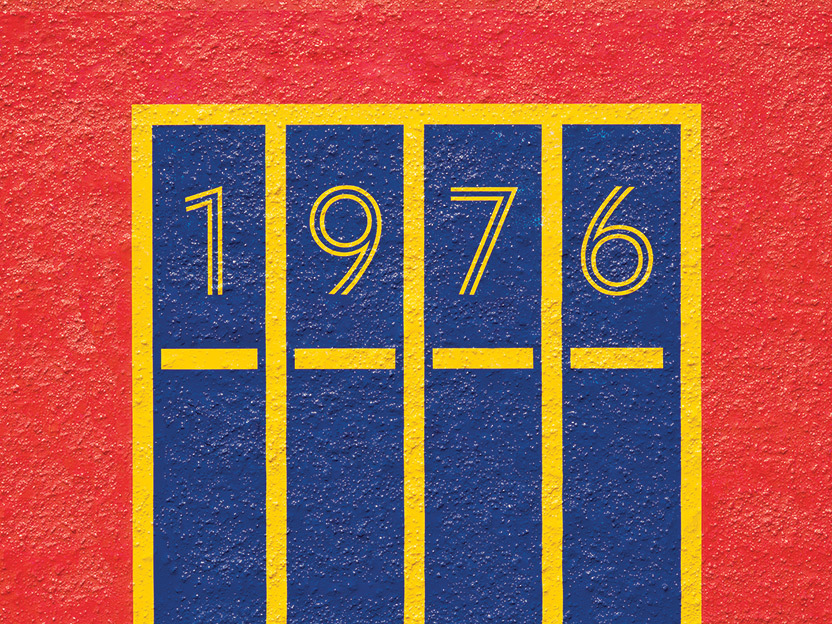 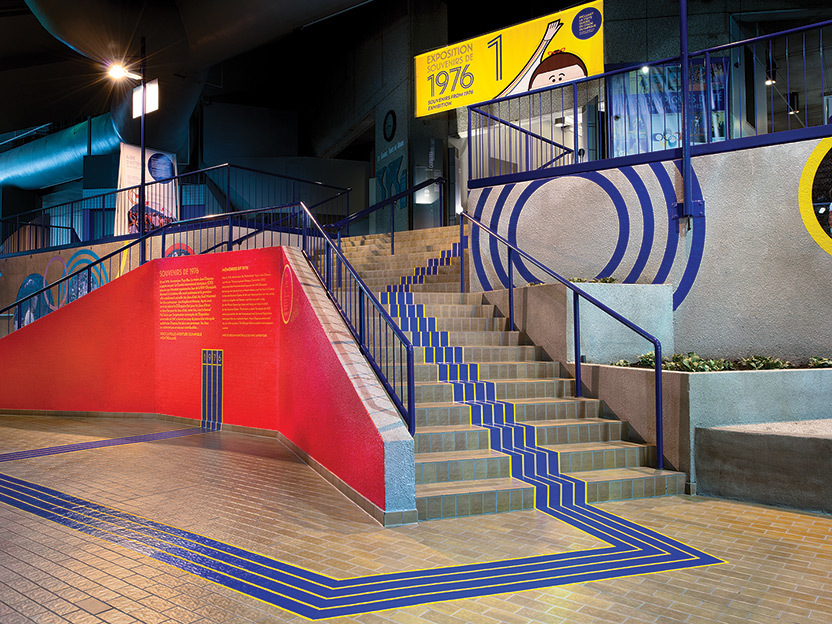 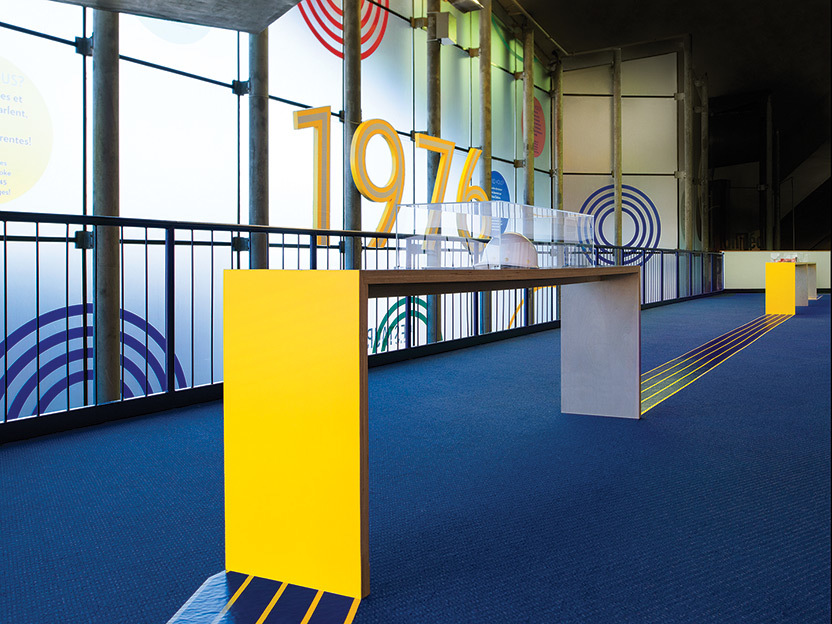 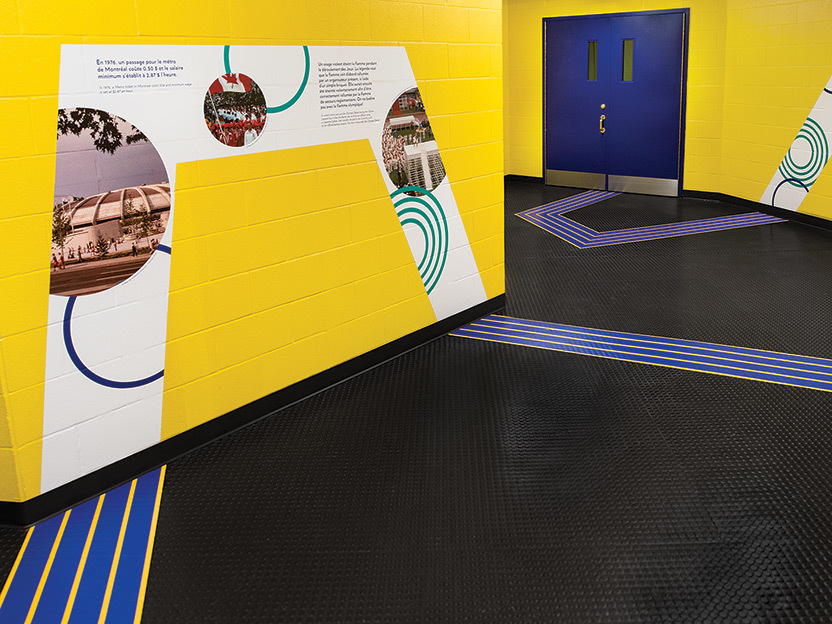 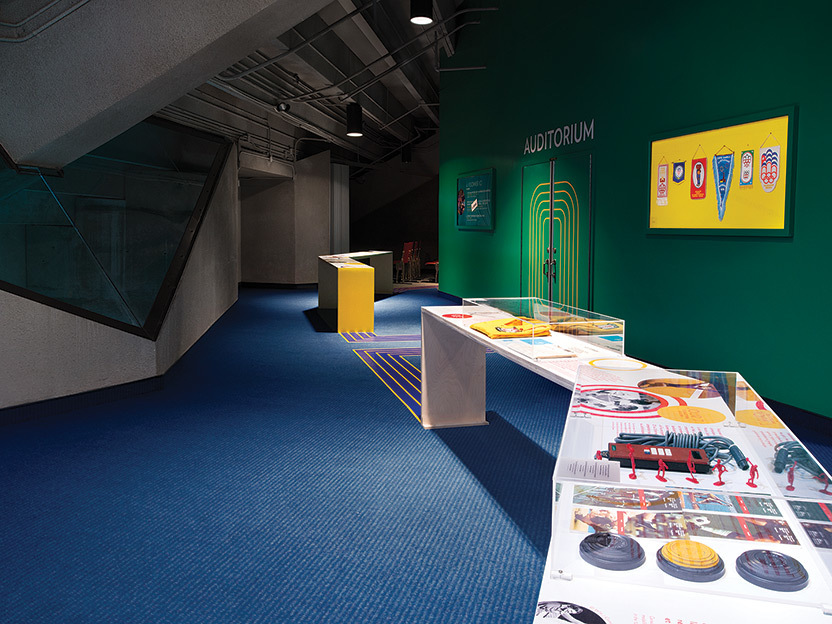 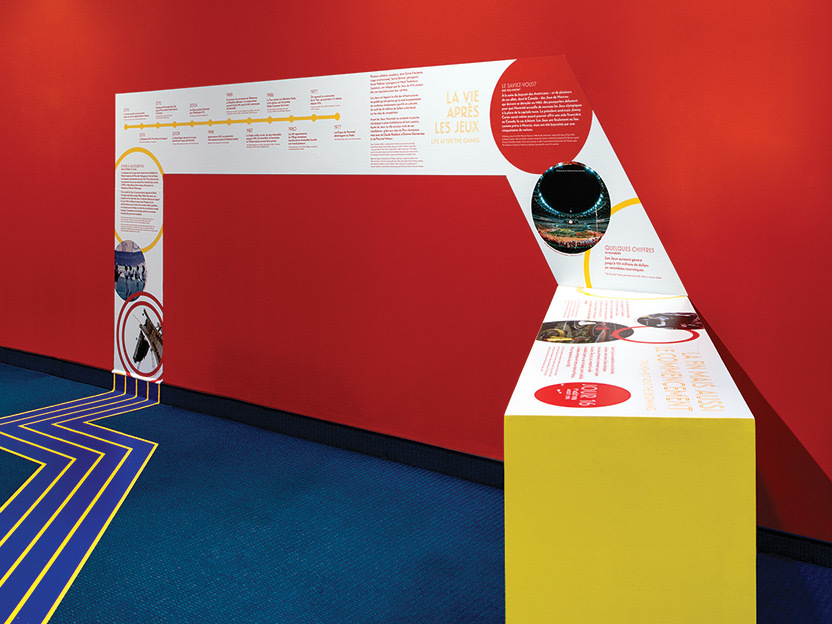 In collaboration with various partners, the Olympic Park’s new identity was also brought to life in the renovated Sports Complex facilities, with new architectural elements from the reception area to the locker rooms to the gymnasium reinforcing the graphic platform in the physical environment. Throughout the Complex, the ubiquitous linearity of the sports world was the main inspiration and driving idea behind the integration of the Park’s identity in each space. The immense Olympic basin enabled this identity to be displayed on an immense scale.

Sports structures, the track and pool lanes, and bleacher coverings are a few examples where this linearity imposes the concepts of competition, discipline and achievement on a physical space. The four brand colours were each assigned specific functions, giving them purpose beyond strictly design. 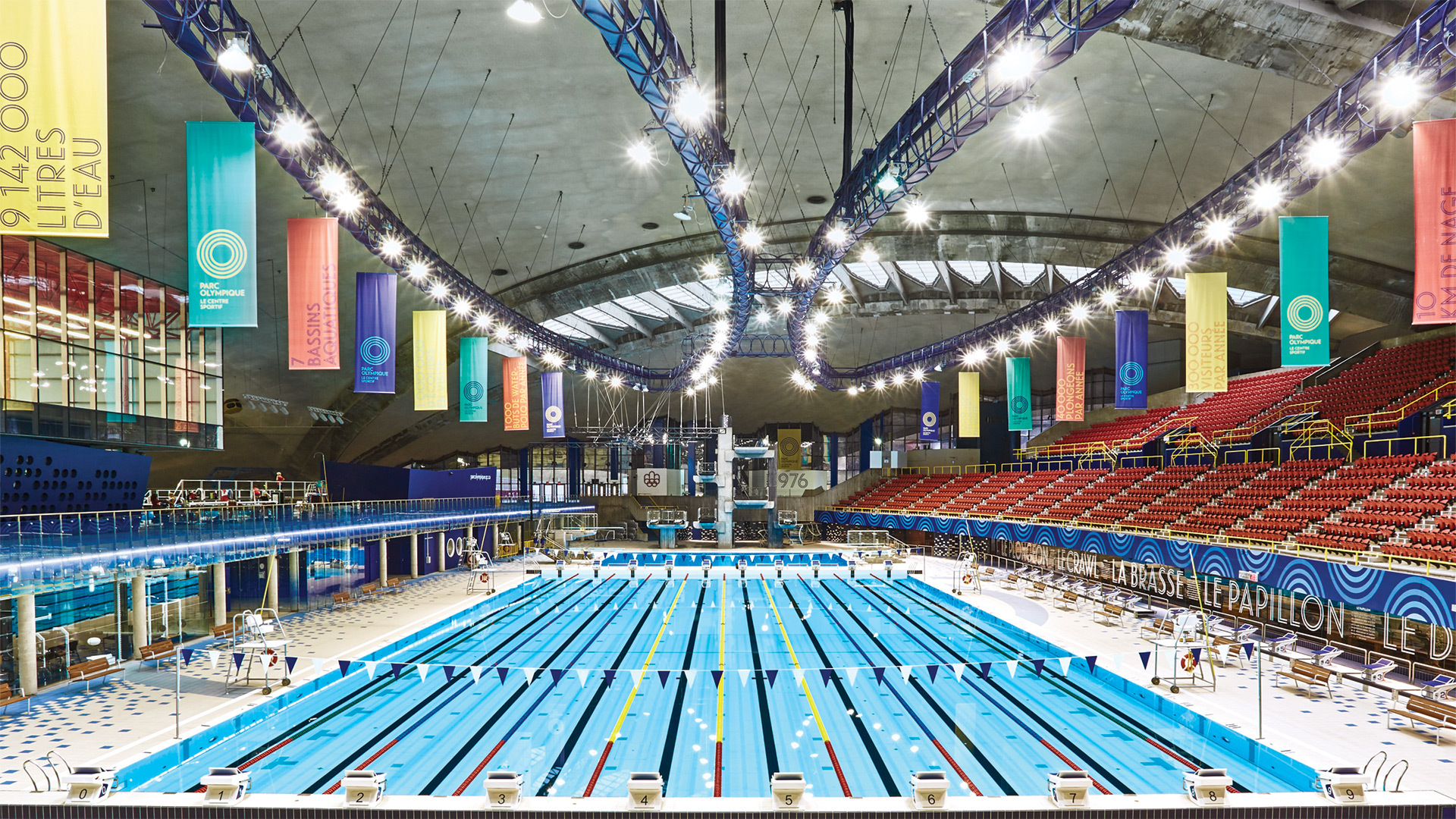 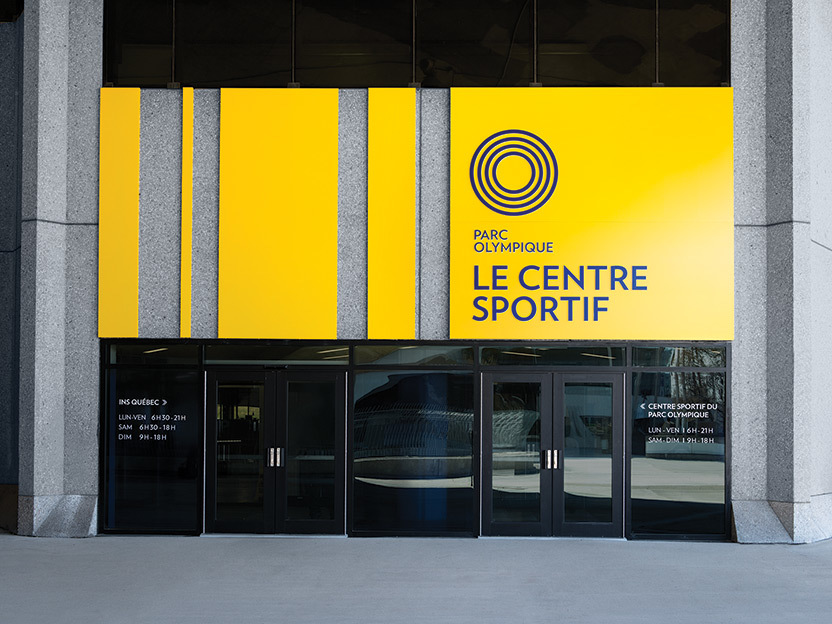 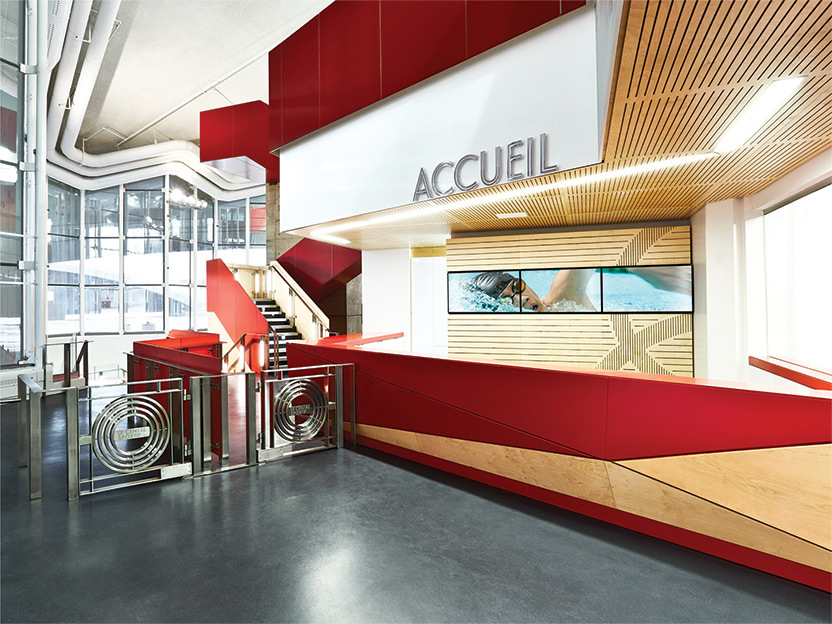 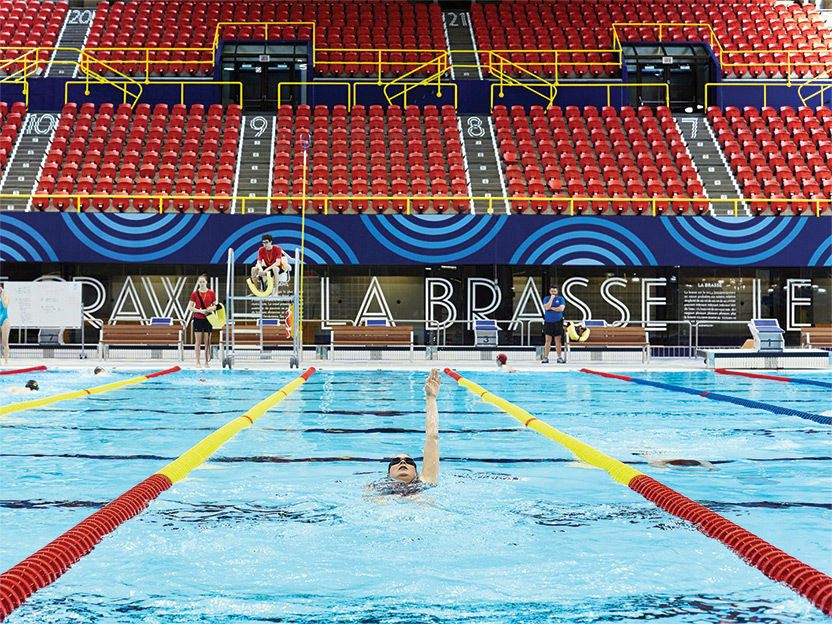 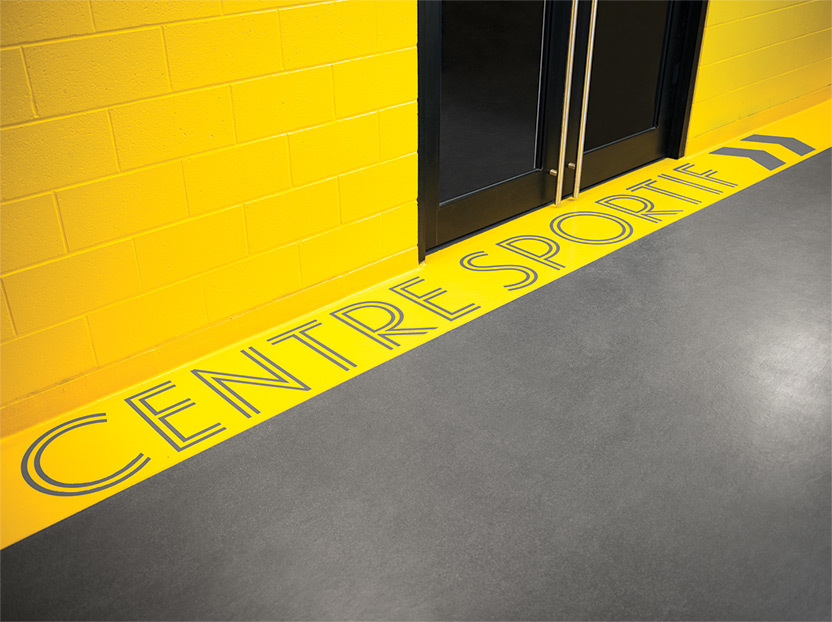 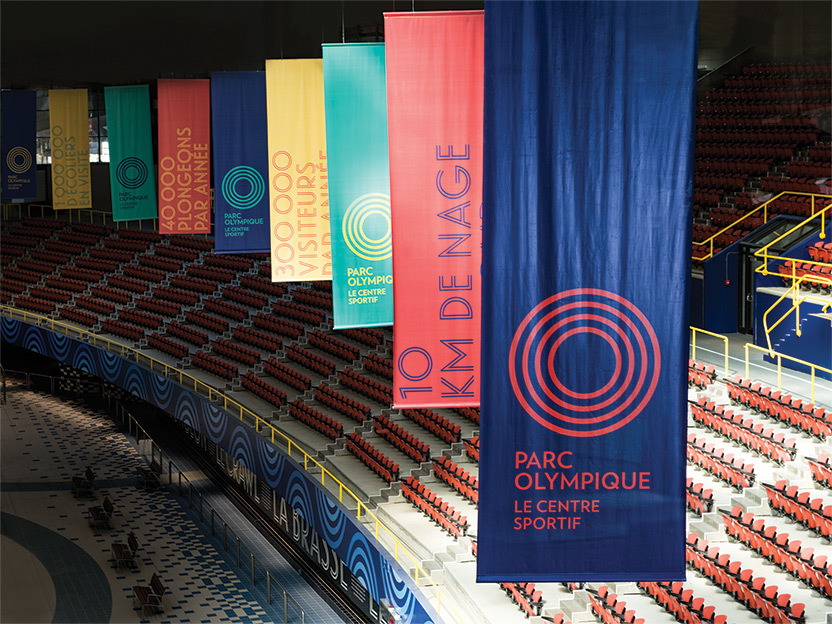 Advertising platform created in order to raise the image of the Olympic Park, a unique Montreal site, visited heavily by both tourists and people from the area who use it as a community space. It communicates all the Park’s upcoming activities, such as the open-air OSM concert, various shows at the Stadium and Montreal Impact games.

Technically, the process involved cutting out 80 vector shapes from 1/16 in. thick cardboard, applying 4 layers of paint and then waiting 8 hours for it to dry. The shapes were then used to produce the 12 posters. No glue or string was employed. The desired perspective and texture were achieved entirely through the use of stacked coins. 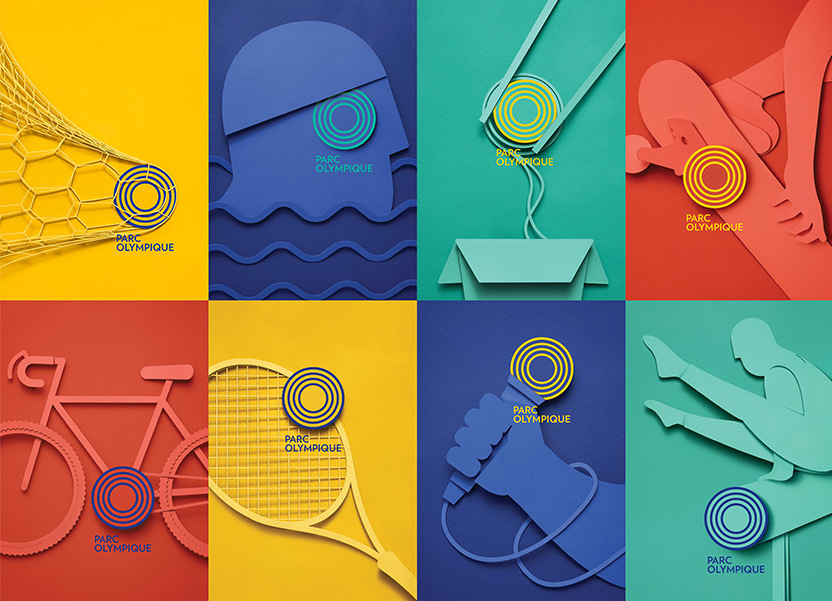 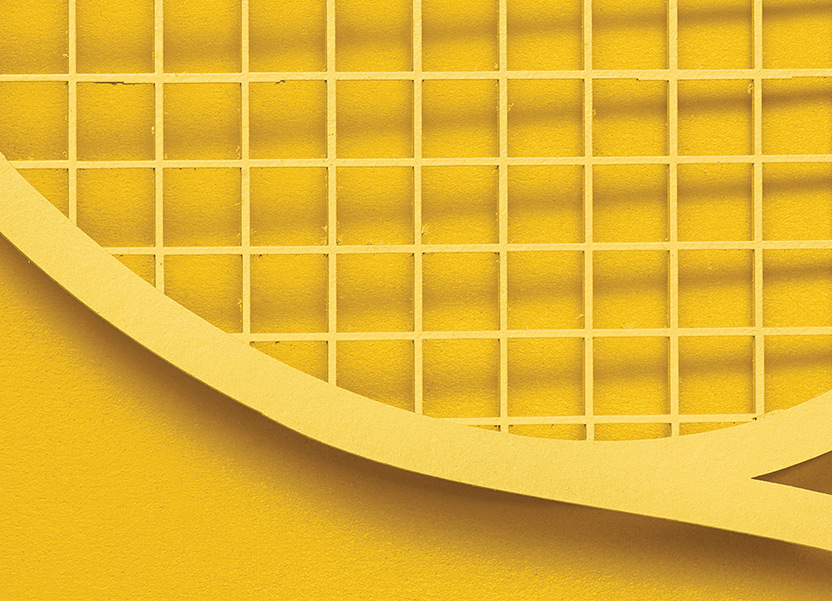 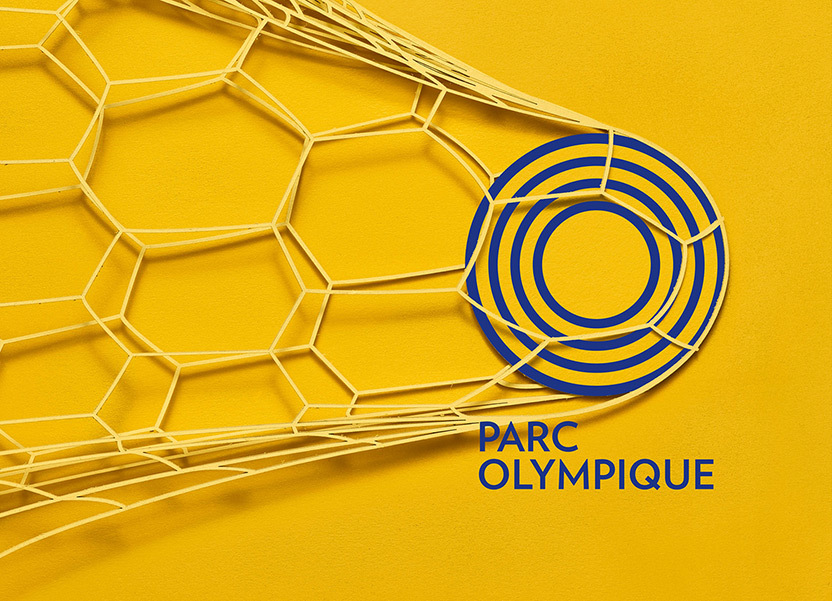 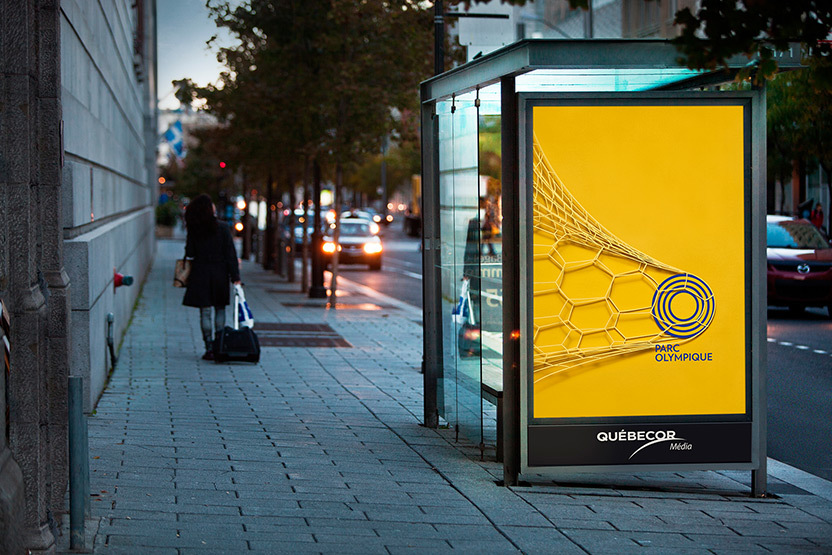 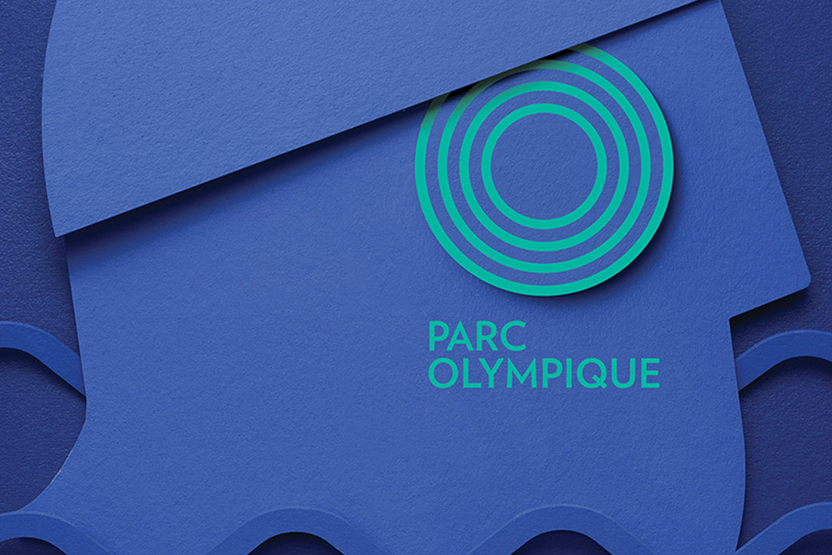